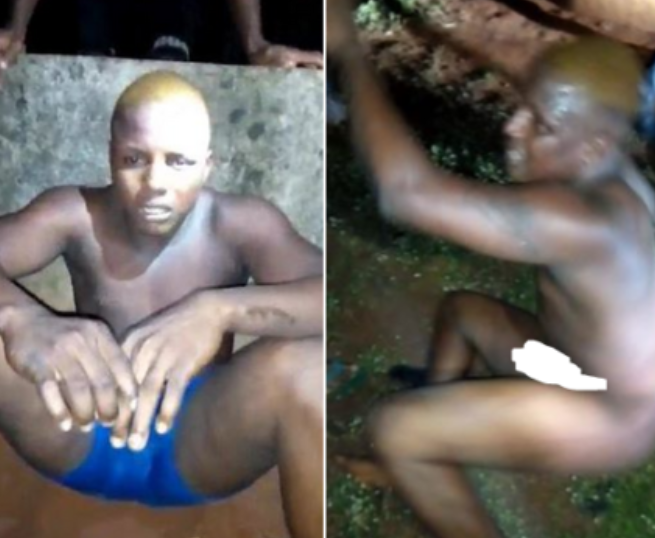 A suspected homosexual identified as Daniel has been apprehended just after he tried penetrating a boy from behind in Benin, Edo State.

According to reports, the suspected homosexual was beaten mercilessly and stripped naked, after his victim’s elder sister caught him red handed and raised an alarm.

The alleged bus conductor in Benin who confessed that this wasn’t his first time of having homosexual sex with a young boy, further disclosed that he had slept with three young boys in Warri, Delta state.

Recall that few months ago, the Delta State police command confirmed the arrest of two male teachers of a secondary school (names withheld) in Agbor, who were allegedly involved in homosexuality.

It was gathered that the teachers allegedly ruined the lives of some students in the school, a popular male secondary school. According to the father of one of the students, (name withheld), the suspects had been in the act with male students for over four years before nemesis caught up with them with the arrest by the police.

They were allegedly caught in the act inside the school premises and upon interrogation, confessed to the crime. Investigation revealed that the victims were treated at the Agbor General Hospital for bruises in their anus.

The police image-maker in the state, Mr. Andrew Aniamaka, who spoke to journalists yesterday in his office, confirmed the arrest of the two teachers. He said the two suspects are in grade level 10 and 12 respectively, adding: “investigation is ongoing while the suspects are being detained.”

This followed up report of the Lagos State government, arraigning 28 adults and 12 minors before a Lagos Magistrate’s Court for allegedly engaging in homosexuality, contrary to the laws of the land. They were all arrested by the police in Owode Onirin area of the state, after being caught in the act of homosexuality at a popular hotel in the area simply known as Vintage Hotel.

Previous: Actress Taiwo Aromokun celebrates birthday with lovely photo shoot
Next: Graphic Photos: Wife kills husband who is a military man in his sleep for having a baby with another woman