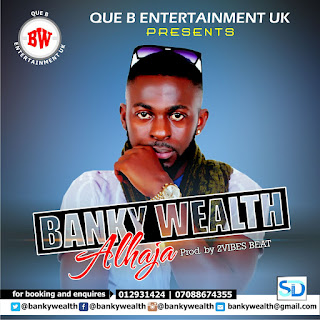 Uk Base Artist Taofeek Bankole Aje A.K.A Banky Wealth {Alaye} Has Bounce Back To 9ja With Dope Club Banger Tittle – ‘ALHAJA’ Prod by Famous Producer 2Vibez, Banky Wealth was born On November 16 @ Mushin Lagos State,a native of Ibadan. He Started Singing At the age of 21years,after a terrible accident which make  him stay out of music for some years, is a fast rising artiste that have worked wit a lot of known artiste ,Promoters and producers, such as T.y mix, Cobams, 2vibez,Billy C.E.O of Que B entertainment UK etc.

Banky Wealth Was Once a DJ At London before going into music, he relocated finally Back to Nigeria early 2015.